Marc Joinville and France Labonté have spent the last six months traveling cross-continent on their Polaris Sportsman 800 X2s. At the beginning of January, they reached Cabo San Lucas , Mexico , and completed the cross-continent part of their trek. Joinville and Labonté still plan to ride to Kingman , Arizona as their final destination.

“It has been an incredible journey,” said Joinville. “Considering the harsh conditions the Sportsman 800 X2s were used in, how incredibly rough some trail sections were and how much extra electrical gear they had to power, they performed beautifully.”

During a camping trip in Utah in 2000, Marc Joinville and France Labonté discovered an ATV trail that ran lengthwise through the state of Utah . Their finding sparked the dream to ride their ATVs from Canada to Mexico , through the United States . They contacted Polaris about their dream and the maker of “The World’s Toughest ATVs” provided them with two new Sportsman X2 800 ATVs, parts and clothing for the cross-continent trek.

“When Joinville contacted us about their idea to travel across the continent, there was no doubt they would be riding Polaris ATVs,” said Jeff LeFever, marketing manager for Polaris’ ATV Division. “Their successful trek on the Sportsman 800 X2s proves Polaris builds ‘The World’s Toughest ATVs.’”

Joinville and Labonté departed from British Columbia , Canada on July 7, 2007 with their ATVs and a trailer that carried all the basics they needed to survive the journey. Their “Quadtrek” took them through Montana , Idaho , Wyoming , Utah , Arizona and down the Baja peninsula, to Cabo San Lucas , Mexico . Along the way, they stopped at various ATV jamborees and fairs, met fans and shared stories of their journey.

“We have met so many new friends and seen so many incredible places,” said Joinville. “We thank Polaris for helping us fulfill our dream and providing us with the experience of a lifetime.” 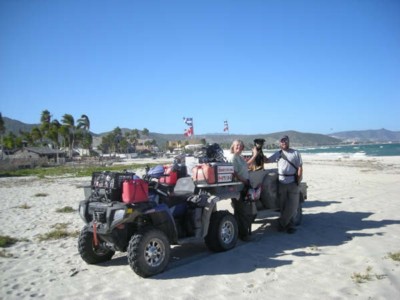